A short history of waste disposal 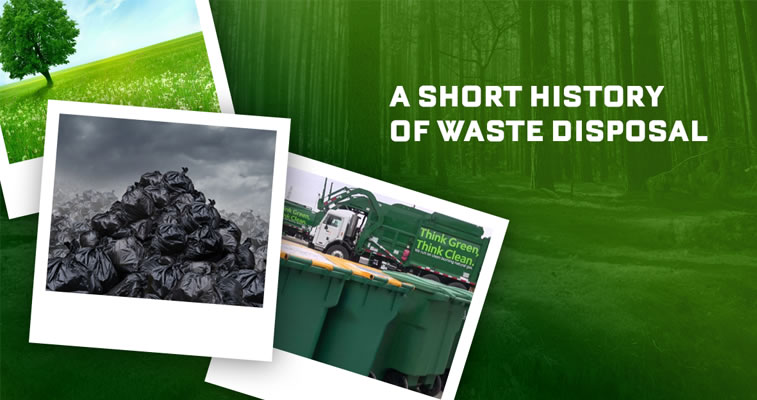 This may come as a surprise, but people rarely think about waste management. Tossing a pizza card box or an empty water bottle into a waste bin is an action we do every day without even thinking about it, because we know somebody will empty the trash can for us. But when did this organised solid waste disposal came into being and how?

Where does all waste come from?

From humans, of course. Just think of all the items you use every day: toothbrushes, plastic bags, clothes, kitchen utensils, furniture, cars and home appliances – how many of them can boast the biodegradable tag and how much do they help pollute the environment if uncontrollably left behind?

The fact is, humans produce more and more waste, and the numbers are on the rise daily. Have you heard of a story of the Great Pacific Garbage Patch? It is a huge island of plastic, chemical sludge and other types of debris, floating in the Pacific Ocean for more than three decades, constantly increasing due to the accumulation of garbage in the ocean, and as a side-effect of plastics non-biodegradability for millennia. When faced with this amount of interference with the natural habitat of many wildlife species inhabiting the ocean, in the long run affecting ourselves, one cannot help but wonder: is our own garbage going to take over the planet?

How did it start?

Long time ago, people did not produce as much waste as today – simply because they had no means of doing so. The initial human communities, since the beginning of time, relied on the materials that were already there, and were in fact the perfect society – in terms of reduction, reuse and recycling of goods. Whatever they owned, they were forced to use it until it was no longer useful. That was when items could be tossed. This fact may in fact speak for itself: organic materials degrade and disappear to make room for new ones, thus reinforcing the recyclability of goods.

The population was scarce, thus its impact on the environment virtually invisible.

The only provider of food, cloth, dishes, and tools, was nature. Food was either found on trees, in bushes, or hunted for. After food was gone, what was left over could be used as either cloth, to cover the body against cold or bad weather, to provide for shelter, or as tools of various applications. Due to its organic origin, not many items could last, so they gradually degraded and evolved into compost, or, on rare occasions, were kept by chance as an evidence of human presence in certain areas around the world. The discovery of each instance of this presence today, as microscopic as it may seem, gives us invaluable insight into how we have become what we are today and how human community had functioned long ago.

When did solid waste become an evident problem?

As the population grew and societies evolved, the amount of garbage produced also increased, but the way of dealing with it was to dispose of it away from the community. Basically, far from sight, far from mind.

Understandably, things stayed the way they were – for hundreds of thousands of years, until at one point in the 18th century, when it became apparent that the increasing population, in combination with industrialisation and mass production of more and more goods, started turning into a problem that must be solved as soon as possible, for the benefit of all.

In fact, it was the Londoners in the mid-18th century who first tackled the issue of filth accumulation on the streets, demanding for organised solid waste disposal. Their early example of municipal-organised waste disposal came into being soon afterwards and worked well for about a century, when the needs shifted again towards better organised and more demanding waste management system.

The 19th century Europe faced cholera epidemics round the continent, which soon led to the first legislation on solid waste disposal, as the connection of filthy water, the lack of hygiene and contaminated food was a direct source of the epidemic. Although the theory of illness transmission was later proven wrong, the positive outcome of it was the advancement of public health and wellbeing of general population, in connection to the importance of adequate waste disposal and management.

The previous century brought about mass production of all things imaginable, together with more waste than ever before. Accordingly, waste management systems needed to be invented to deal with this issue, and it is comforting to know more and more ways are emerging every day.

Is there a solution?

Advancement in mechanical tools, technology, and chemical ways to treat debris, residue and litter serve as a solid ground for the belief that we can deal with whatever we produce, be it computers, relationships, intergalactic journeys or, last but definitely not least, waste.

All countries in the world today have state-controlled waste management systems based on their solid waste policy put in practice by legal systems and the internal organisation of the state services.

Many private companies, such as Green City International, now work with state instances in providing the best possible solid waste management equipment and constantly coming up with new solutions and waste equipment and products. It is not an easy feat, but what matters is that somebody out there cares about us enough to deal with our trash.

In case you missed our first blog post, where we introduced the Green City International blog, find it here:

Also, if you are interested in what the future holds when it comes to waste management, make sure to read our blog post on the topic: